skip to main | skip to sidebar

Do You Know the Way to San Jose?

AND WE'RE OFF
Well, I guess it's about time I wrote about our summer, seeing as how August is quickly creeping up on us, and so much has happened in this small amount of time.
On June 22nd we started out on our road trip to San Jose, CA. Mike was really excited to get to California and get started on his internship this summer, and although I was a little reluctant to have him gone, I was really excited to be in the car with him for such a long time. For those of you who don't know, Mike works for Delta and anytime we want to go anywhere, we fly, even to St. George, and Vegas. I know, lame, but if we can fly, we will. Driving was definitely a new experience for us, but a great way to spend quality time together. We headed out on Sunday afternoon (a little later than planned, but when do you ever leave on time?), in my dad's old little Honda Del Sol. Now if you really look, you can see that this could have been potentially a bad situation, because we were literally TRAPPED in a tiny tin can (sorry, Dad, but it is so small, almost claustrophobic). There was nowhere to go in case of an argument, not that I was planning on it, but you know what can happen when you are in a confined space with someone for a long period of time. Anyway, enough about that. The car was great, and we had a lot of fun, minus a couple minor setbacks, but eventually we made it. Thanks, Dad for the loaner. 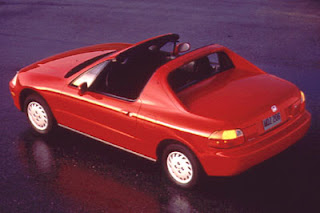 On our way, we stopped in Reno, at Circus Circus, to get some sleep for the night, but nothing too memorable there, so moving on. 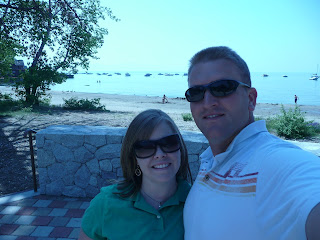 The next stop on our trip, that was filled with road construction, and single lane highways, and smoky, hot air, was Lake Tahoe. This was the best pic that we had, and if you have ever been to Tahoe, you know that something is missing. How about the mountains and the beautiful landscape. Thanks to the fires raging in Northern California, the sky was filled with smoke and you couldn't see a dang thing! I personally had never been to Tahoe before and Mike was so excited to show me this beautiful place that he remembers visiting when he was younger, it was such a disappointment when we got there. We will just have to stop on our way back (in about 18 days, but I'm not counting or anything) and hopefully it will be a little bit more clear and we will be able to take in the beauty, or so I've heard. 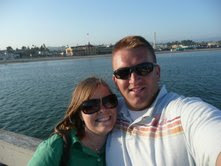 Next stop on our trip was actually Santa Clara. We drove by to see where Mike would be living for the next 8 weeks. Then on to Downtown San Jose (only about 5 mins from his apartment) and it was such a pretty city. There is a park in the middle of the city, across from Mike's office. Surrounded by museums, and fun restaurants and cute little stores, a great way to spend an afternoon. We headed down to Santa Cruz from there, where we spent the night before I left Mike in California all by his lonesome self. We walked down to the beach and ate dinner (fish and chips,) on the Pier. The Pier we were walking on was a natural wildlife reserve where seals came to hang out, sleep and play. We got to watch them for a while. I loved it! Then again, I am mesmerized by pretty much any marine creatures! I was in seal heaven!
PANCAKES AND OLD FRIENDS 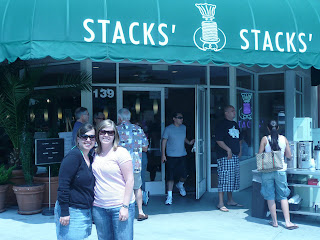 A couple of weeks after I came home from California (with Mike visiting for the 4th in between there), I headed back to San Jose for a visit. On this trip I was able to make contact with an old roommate of mine, that I actually met while I was living in Oregon, and she and her family are now living about 3 hours from San Jose, unfortunately right where the worst fires were burning in Northern Cali, so she was looking for an escape. We decided to meet up for breakfast one morning, while she was on her way to the beach. We ate breakfast at this yummy restaurant "Stack's" in a darling little town called Campbell (I think I might want to live there one day). The food was great and the restaurant had a fun atmosphere. After that, we went our separate ways, but it was so great to see you again, Senessa. I am thinking there will be many more opportunities. 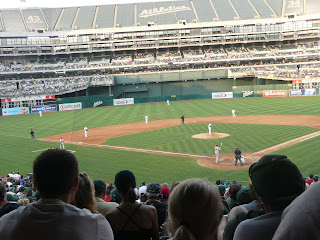 Of course we had to take in an Angel's game while I was there, basically this is the whole reason for my visit. They were playing the A's in Oakland, which is about a 45 minute train ride from San Jose. We got tix right behind home plate and were surrounded entirely by A's fans. We tried to be courteous, knowing that this was their home game, but we couldn't help but let out a few cheers and claps now and then. (I thought the drunk lady in front of us was going to turn around give Mike a piece of her mind). 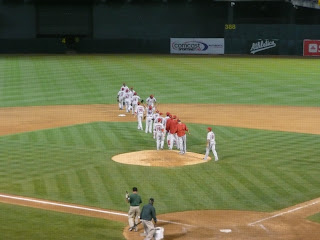 Oh and did I mention that the Angel's won that game? Maybe that is why A's fans weren't so fond of us, or. . . 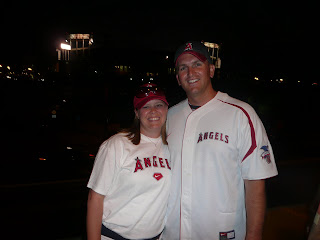 maybe it was because we looked like this! As we waited at the platform for the train, a very kind but reluctant A's fan took this picture of us. His friends were not very happy that he took the picture, but we were very grateful, and we had definitely behaved ourselves that night. After being boo'd at, spit at and given crusties galore, it could have been a lot worse. Have you ever heard us heckle? Anyway, we had a blast and I love spending time like that with Mike. He was in baseball heaven!

Ok, so first off I have to say thanks to Marcie, and then Morgan, for sending me speeding down memory lane this morning. Man it is like a train just barreling through. I saw this tiny tag on Marcie's blog and I started thinking about all the good times that were had in Jr High and then High School, and then even college and I am feeling very nostalgic at the moment. What fun times! If you want to play along I would be so thrilled. I loved to reminisce. We could almost pretend that we are sitting around a table at Jake's Over the Top ("The Max"), or Cafe Rio.
Anyway, hope you enjoy!
I love you all!


1. Add a comment of a memory you have of the two of us together. It doesn't matter if you know me very well or just a little, it can be anything. It can be a recent memory or from way back. Once you leave a comment I will assume you are playing too.
2. Add these instructions to you own post and wait for the memories to start rolling in.

Posted by Mike and Paige Burgin at 8:44 AM 15 comments 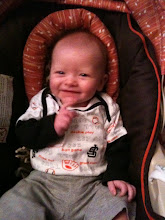 You've Got a Friend!

We're up to Snuff

Check Out Some of These Titles